On July 31, the â€œAutomobile Collision Safety System Technology Application Seminarâ€ jointly organized by the Brake Committee of China Association of Automobile Manufacturers and Shanghai Automotive Engineering Society was held in Zhengzhou. Participants discussed the status quo of domestic and foreign technology development, problems, and how to promote the car collision avoidance system. â€œIn terms of active collision avoidance technology, foreign counterparts are at the forefront in technology and marketing. Fortunately, there are already independent companies that have made major breakthroughs in this technology and set a top speed of 120 kilometers per hour. Achieving active collision avoidance broke the record of the highest speed of 70 km/h for similar products abroad.â€ Gu Yifan, consultant of the Brake Committee of China Association of Automobile Manufacturers, said in an interview that this technology will effectively solve the worldwide problem of car rear-end collision. 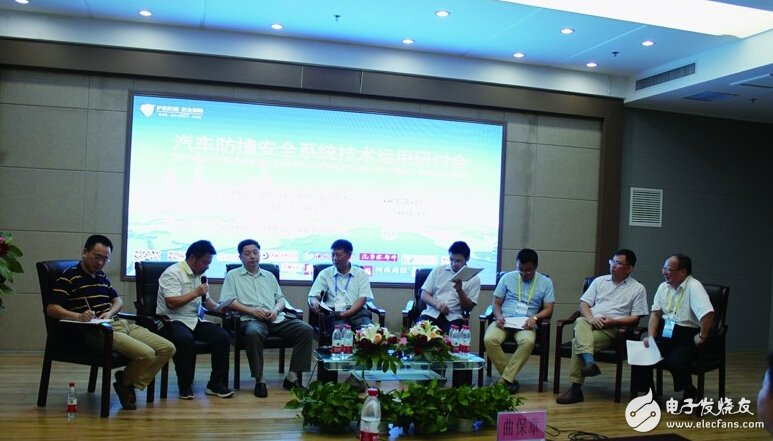 The car intelligent collision avoidance system, also called the car intelligent emergency braking system, its key technology lies in the distance measurement. It is understood that the current ranging technology used in China is millimeter wave radar plus camera ranging technology and laser radar ranging technology. Both mainstream technologies have advantages and disadvantages. The former is sensitive to light and affects the camera's auxiliary recognition; the camera cannot accurately identify the front target in rain, snow, fog, etc.; the reaction time lags, and the camera cannot be identified in time if the speed of the vehicle in front changes. Although the latter has the advantages of fast response, low price, and no influence of light changes, the sensitivity of the high-resolution laser radar is poor in anti-interference ability, and it is easy to be disturbed by accidents, and the detection distance is low and the vehicle speed is high. It does not play an effective collision prevention role. â€œThe technical difficulty of the safety anti-collision system is how to effectively integrate with the whole vehicle braking system. This problem directly relates to the interface technology of the brakes,â€ said Qu Baozhang, chairman of Henan Escort Industry Co., Ltd. The brake interface technology makes the brakes more intelligent, avoids rear-end collision and intelligent cruise, and the intelligent brake is the future direction of the brake.

According to Qu Baozhang, there are currently two solutions to solve this problem, adding hydraulic pump control retrofit solutions and electronic hydraulic brake system retrofit solutions. But both options have their pros and cons. "Increase the hydraulic pump control retrofit plan, only need to increase the one-way hydraulic pump, the modification is convenient, the cost is not high, but the vehicle needs a certain space to install the fixed one-way hydraulic pump. There is a time process for the pump pressure, which is not conducive to the emergency situation. Formulated." Qu Baozhang said that the electro-hydraulic brake system transformation plan is to use the original car interface, without destroying the original car structure, and the installation is simple. However, the reliability of the electronic brake part of the original car has yet to be verified. â€

In the safety collision avoidance system, the development of independent enterprises is relatively lagging behind. But the good news is that there are new breakthroughs in independent companies in this field. Henan Escort Industrial Co., Ltd. successfully solved the contradiction between high sensitivity and anti-interference in the laser radar ranging technology. The self-developed automobile intelligent cruise emergency braking system has obtained a number of patents, and its laser radar ranging distance can reach 260. Meters, while the maximum distance that international counterparts can reach is 150 meters.

According to Qu Baozhang, the system consists of four parts: ranging probe, early warning host, tandem controller and brake motor. The laser detection technology has the advantages of long detection distance and strong anti-interference ability. It can not only prevent collision warning, fatigue driving, but also be affected by nighttime and severe weather conditions. It can be realized in the range of 3 to 120 kilometers per hour. Intelligent cruise, active collision avoidance and accident recall. â€œSince 2004, the product has passed the road test of more than 1 million kilometers of 12 different types of vehicles and the rigorous testing of Yutong Bus Company. The test results are very good.â€ Qu Baozhang said that it has been widely used in passenger cars, trucks and cars. , school buses, special vehicles and other sub-models on the market. "The breakthrough of independent enterprises in the collision safety system has an important role in promoting the competitiveness of China's automotive core technology," said Bao Shiming, secretary general of the China Automotive Industry Association's brake committee.

At the conference site, representatives from the automakers expressed their desire to choose the right independent suppliers to cooperate with them, but also raised questions and suggestions on the product functions of the intelligent anti-collision system produced by the independent enterprises.

Brilliance Automotive representative Lu Zhongda believes that â€œwhether the controller of the intelligent anti-collision system can integrate ABS with the EBA controller; whether the interface is an algorithm that can accept the electronic brake system; whether more intelligent driving assistance technology is highly integrated The main engine factory chooses the key to cooperation.â€ He also believes that it is also important for suppliers to have a complete test development system in the ACC development process.

A representative from ABS proposed that ABS companies have mature experience in ABS and ESC technology, and can strengthen cooperation with smart collision avoidance system companies to integrate the two technologies to make the system more competitive. In addition, there are suggestions from the OEM for how to diagnose the controller and how the EBA radar bracket can be placed without affecting the aesthetics.