3G networks have gradually entered all areas of people's lives. People are more and more comfortable with the wide variety of data services on mobile terminals. However, problems such as insufficient bandwidth for mobile services and low network stability have also emerged. Under such circumstances, the construction voice of LTE is getting higher and higher. As a standard for next-generation mobile technology, LTE has been put on the agenda by domestic operators.

The main feature of LTE is to improve the 3G air access technology, so that it can provide greater uplink and downlink rates: under the 20MHz spectrum bandwidth, it can provide downlink 326Mbit / s and uplink 86Mbit / s peak rates, improving the cell edge User performance, improve cell capacity and reduce system delay. 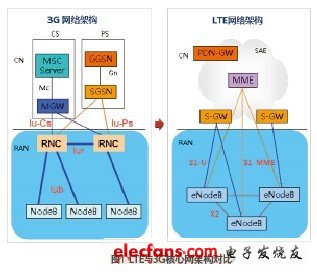 As the networking model and main technical characteristics have changed, the demand for the bearer network has also changed significantly. The bearer network demand in the LTE era is mainly reflected in the following aspects.

In 3GPPR4, the core network continues the traditional tree structure. If any network element fails, the RNC it manages cannot work normally. Later, the concept of POOLArea is introduced, and each eNB can be controlled by all MSC nodes in POOL to achieve resource sharing. So for the bearer network, due to the elimination of RNC in the network architecture, the flattening and IPization of the LTE network structure have an impact on the core layer network, and the convergence access layer structure has not changed much.

Both S1-Flex and X2 are based on IP addressing, and the connection between multiple points requires the introduction of L2 VPN or L3 VPN technology.

S1-Flex requires load sharing and redundancy protection to provide a reliable and flexible network docking protection solution. The X2 interface is applied between the base station and the base station, and a MESH network needs to be formed at the access layer.

In the LTE era, due to the multi-homed SGW and S1-flex handover of the base station (eNB), the requirement of wireless service control is transferred to the bearer network, which requires that the bearer network must support the L3 function. At the same time, since the traffic of the X2 interface only accounts for less than 3% of the traffic of the base station, and the number is huge, there are thousands of records. Most of the neighboring base stations do not have directly connected physical routes, so X2 services can be accessed with service access control. Functional bearer network equipment is devious.

In order to enable users to obtain the "AlwaysOnline" experience, the specific requirements for LTE delay are as follows.

Second, the control plane activation delay is less than 100ms (used for the handover of the X2 interface between base stations and high-speed mobile UEs).