With the acceleration of data service requirements, 4G technology will replace 3G as the mainstream wireless communication technology in the next few years, and TD-LTE with China's independent intellectual property rights will become an important part of it. This article will introduce the current commonly used transmitter architecture , And analyze the system indicators of the TD-LTE transmitter, and combined with TI's chip solution, comprehensively introduce the system solutions that support TD-LTE.

In general, for TD-LTE, the biggest challenge is bandwidth. China currently has 190MHz (2500-2690) continuous bandwidth allocated to TD-LTE, and there are many multi-band requirements (such as F + A; 1880-1920MHz, 2010-2015MHz) frequency band, etc. have very high requirements on the transmitter, especially the feedback channel; strict out-of-band spur requirements, especially the F-band, is also a very big challenge for the transmitter system In addition, the requirement of high EVM and low noise floor is also a challenge to system design.

1.1 Zero IF transmission, zero IF feedback

1) The same local oscillator signal can be used for transmission and feedback, saving and simplifying system design and cost;

3) Since the input and output frequency points of the modulator and demodulation are zero, the system does not have various spurious signals related to the intermediate frequency, which greatly reduces the need for various filters;

4) For ADC and DAC, the input / output frequency is low, and their performance is greatly improved, which is conducive to system design;

5) After adopting zero intermediate frequency, the flatness of the DPD signal can be ensured to be high, which is beneficial to DPD processing.

At present, more and more base station transmitter systems have begun to adopt this architecture, but the architecture also has its weaknesses:

2) The low-order harmonics (second and third) of the DAC will be in the band, and there is no way to suppress them through the filter, so it is necessary for the DAC itself to have better second and third harmonic performance, and the algorithm is also required for low The calibration of subharmonics will lead to complicated algorithms;

Considering that the current algorithm has not been able to calibrate LO leakage, sideband signals, and various low-order harmonic signals very well, this kind of architecture has not yet been adopted for the MCGSM system.

1.2 Zero IF transmission, real IF feedback

Unlike the architecture of Figure 1, when the feedback channel uses a mixer instead of a demodulator, it is called real IF feedback.

This scheme is currently the most common architecture. Compared with architecture 1, the biggest difference is in the feedback channel, so its biggest advantages:

1) Since only the transmission channel uses zero intermediate frequency, the system's local oscillator leakage and sideband calibration are relatively easy to calculate;

2) For the feedback channel, due to the digital high-IF method, its local oscillator leakage and image signal can be filtered by a simple filter without any calibration;

3) Due to the real intermediate frequency scheme, only one feedback ADC is needed;

4) The sampling rate of the DAC is reduced, and the design of the anti-aliasing filter between the DAC and the modulator is simplified (only a low-pass filter is required).

The disadvantages of this architecture are:

1) The ADC sampling rate requirements for the feedback channel are very high, especially for the TD-LTE 190MHz bandwidth requirement;

2) The filter of the feedback channel will introduce DPD signal unevenness;

3) Two local oscillator signals are required. Most base stations currently use this architecture.

1.3 Complex IF transmission, complex IF feedback

1) The same local oscillator signal can be used for transmission and feedback, which simplifies and saves system design and cost;

2) LO leakage and sideband suppression can be suppressed by filters, which greatly reduces the algorithm requirements;

3) The low-order harmonic signals are out of band and can be suppressed by filters, which reduces the algorithm requirements;

4) Due to the complex IF architecture, the adoption rate of the feedback channel ADC needs to be reduced by half, especially for broadband TD-LTE systems.

1) Since the signals of DAC and ADC are high-frequency signals, their performance is greatly affected;

2) The linear index of the demodulator will decrease;

3) The flatness performance of the transmission and feedback channels will be relatively poor, which will have a greater impact on the performance of the DPD. Since there is no need for DC and sideband calibration, and it can easily support broadband signals, it is relatively large on TD-LTE potential.

This section will introduce the TD-LTE air interface index requirements and the corresponding system index allocation. According to the 3GPP TS 36.104 requirements, the TDLTE transmit air interface index requirements include: base station output power, base station output power dynamic range; transmitter on / off power; transmission The signal quality of the machine; the unwanted emission; the intermodulation of emission and others. The following will analyze and decompose the important indicators.

The base station output power refers to the average power per carrier of the antenna port. This index requirement is usually put forward by the operator. At present, TD-LTE usually requires a maximum power output of 8 antennas of 20W (43dBm). 3GPP requires its accuracy to be +/- 2dB, the accuracy is guaranteed to be +/- 2.5dB under extreme conditions, but in order to simplify the power amplifier design and good thermal design, the power fluctuation of the link is usually required to be +/- 1dB, in broadband signals, especially China TD-LTE 190MHz bandwidth, how to ensure that the power fluctuation of the link is within +/- 1dB.

In addition to ensuring better fluctuations in the selection of link devices, closed-loop power calibration is also necessary. The following table is an example of requirements for closed-loop calibration.

2.2 Transmitter on / off power

The transmitter switch is specifically an indicator requirement for TD-LTE. Since TD-LTE uses the same frequency reception / transmission, after the transmitter is turned off, its noise floor is required to control the impact of the receiver to a certain range. 3GPP requires it to After shutdown, the power is lower than -85dBm / MHz, after normalization: -85dBm / MHz =-(85 + 10 * lg10 ^ 6) =-145dBm / Hz, considering the gain, it is allocated to the noise floor of the DAC modulator Make sure that it is around -155dBm / Hz.

3GPP requires that the frequency deviation of the modulated carrier frequency within a subframe period (1ms) should not exceed +/- 0.05ppm. In the TD-LTE transmitter system, since the baseband system is fully synchronized, there is no long-term frequency error, so Its frequency error mainly comes from the contribution of clock and frequency synthesis.

The requirements of 3GPP for various modulation signals are shown in the following table. Usually, designers need to reserve a margin of 2-3%.

The contribution of EVM to the entire two-way transmission mainly comes from several parts: digital processing and link part.

1: CFR (peak cut processing), in order to improve the efficiency of PA, peak cut is currently the most important technology combined with DPD, it has a very important impact on the EVM of the system, different peak cut technology performance is different, usually hard peak cut It is relatively simple, but the impact on the system, especially the EVM, will be relatively large. The current commonly used method is peak cancellation, although it requires more resources, but it is optimal for the performance of the entire system. The specific impact of CFR on EVM, but need to be clear that CFR has a very important impact on EVM.

As shown in the following general diagram of the transmission link, we can list 7 factors that affect EVM. Without detailed derivation, this article directly applies the conclusion (2).

A: I / Q path is unbalanced, set the gain difference to Î´ dB

B: Influence of the phase shift error of the local oscillator of the quadrature modulator on Î² on EVM

C: The leakage of the local oscillator Â£ Impact on the EVM

Let G? Be the power spectral density of the phase noise, then 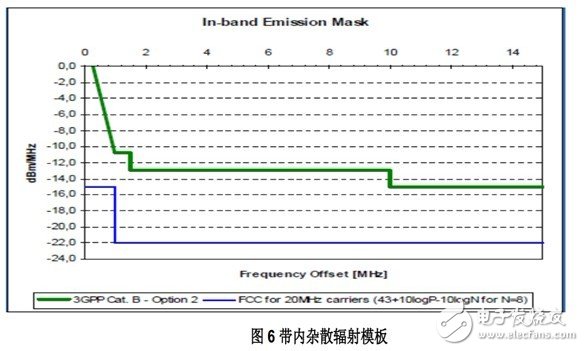 According to the above results, it can be assigned to each level such as DUC, CFR, modulator, power amplifier, etc., to ensure that the cascade result cannot be lower than the above value.

ACLR refers to the ratio of the average power of the main signal and the power of the lead signal. Generally, 3GPP cat A requires that it can take a relative ratio of -45dB or -13dBm / MHz as the absolute value of the lead power. It is lighter; cat B can be lighter in relative 45dB or absolute -15dBm / MHz. Compared with the in-band spur requirements, ACPR requirements are lower. It is usually used to evaluate the nonlinear indicators of the transmitter system. In the system, the PA driver, the nonlinearity of the modulation, the phase noise of the local oscillator signal, and the nonlinearity index of the DAC all affect the ACLR of the system.

ACLR is a system indicator, corresponding to PA driver, the non-linear indicator of the modulator is OIP3, and the rough conversion can be expressed as:

Especially for the signal interference of the receiver, you need to ensure that -96dBm-10 * log (100KHz / Hz) = -146dBm / Hz, which is not suppressed by the filter, you need to ensure that the output power is extremely low after the transmitter is cut off; For the -98dBm spurious requirement of the common site, it is necessary to suppress the corresponding common site frequency when designing the duplexer.

The transmit intermodulation requirement is used to test the ability of the transmitter to suppress its own nonlinearity. The interference signal tested is a 5MHz E-UTRA signal with an average power of 43dBm-30dB = 13dBm, and its position is located +/- 12.5MHz away from the main signal. , +/- 7.5MH At +/- 2.5MHz, the intermodulation products must meet the spurious emission template shown in Figure 6. 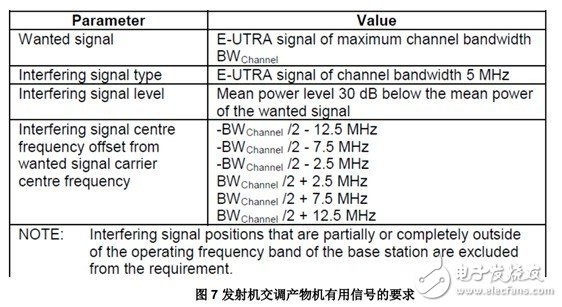 The second section analyzes the specifications of the transmitter in detail. In this section, the requirements of key devices (DAC + modulator, clock, frequency synthesis) will be introduced based on its specifications and the TI solution.

High bandwidth: supports 190MHz BW, requires a DPD bandwidth of at least 600MHz, and a DAC data rate of 750MHz.

Flatness: Figure 8 shows the flatness of DAC34SH84 + TRF3705, combined with frequency calibration, it can meet the flatness requirements. 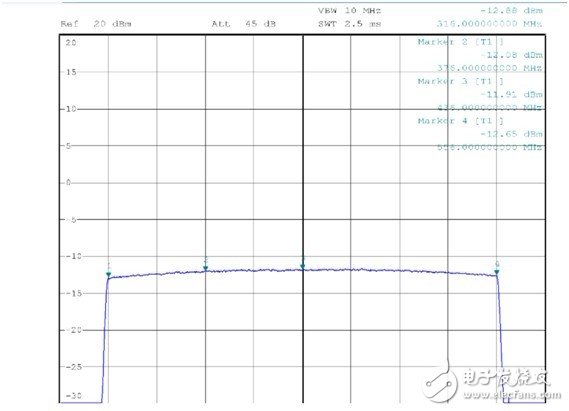 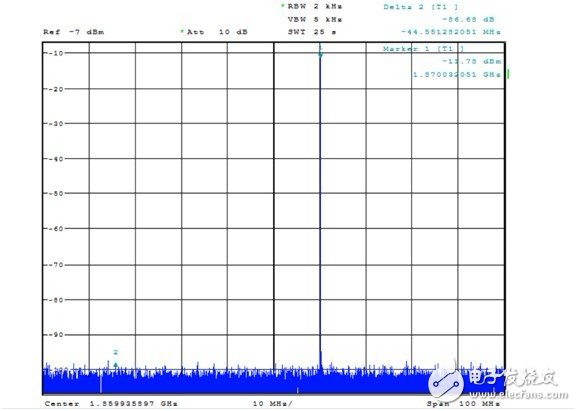 The copper base board is the most expensive one among the metal substrates, and the heat conduction effect is many times better than that of the aluminum substrate and the iron substrate. It is suitable for high-frequency circuits and regions with high and low temperature variations and the heat dissipation and architectural decoration industries of precision communication equipment.

Generally, the finishing include ENIG, immersion silver, LF HASL, OSP, etc. The copper substrate circuit layer is required to have a large current carrying capacity, so a thick copper foil should be used, and the thickness is generally 35 Î¼m to 280 Î¼m; the thermal conductive insulating layer is the core technology of the copper substrate, and the core thermal conductive component is aluminum oxide and silicon powder. It consists of a polymer filled with epoxy resin, low thermal resistance (0.15), excellent viscoelasticity, resistance to heat aging, and ability to withstand mechanical and thermal stresses.

Metal Base Circuit Board