The full name of DLP is "Digital Light Procession", which means digital light processing in Chinese, which means that this technology uses digital micromirror wafer (DMD) as the main key processing component to realize digital optical processing. The principle is that the light emitted by the light bulb is divided into three primary colors of RGB through a color wheel, and then the color is projected by the lens on the DMD chip; the digital signal of the digital micromirror wafer is converted into continuous light by the method of synchronizing the signals. For the gray scale, the color is expressed in combination with the three colors of R, G, and B, and finally the reflection is imaged on the projection screen through the projection lens.

From the technical principle of DLP, it has the following advantages:

Reflective advantage: Because DMD is a reflective device, it has more than 60% light efficiency, making the DLP system more efficient.

Seamless image advantage: Due to the rear projection method, the image can be 100% projected on the screen. Through the special processing of the screen edge, the gap between the screens is less than 0.5mm, which is commonly called seamless stitching.

Reliability: DMD has an effective service life of up to 100,000 hours.

Of course, DLP stitching also has its drawbacks. Since the light source of the DLP splicing is from the bulb, it consumes a large amount of power and has a high heat dissipation, and the brightness is lowered after a period of use, so that the user must constantly change the bulb to maintain the original display effect, and its unit box The body is large, it will cause some troubles during installation, etc., which brings inconvenience to the user.

However, with the continuous development of splicing technology, DLP splicing adopts DLP splicing unit after LED light source, which not only has a great breakthrough in service life, but also has revolutionized changes in color and power consumption. Let DLP splicing continue to maintain the market leading edge. 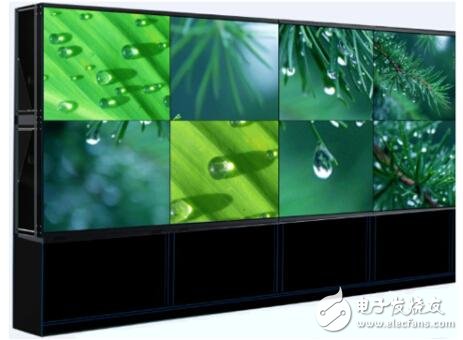 The LCD is called Liquid Crystal Display. The LCD is constructed by placing liquid crystals in two parallel glass. There are many vertical and horizontal small wires between the two glass. Direction, refracting light to produce a picture. Since the liquid crystal material itself does not emit light, a light pipe as a light source is provided on both sides of the display screen, and a backlight plate (or a light homogenizing plate) and a reflective film are formed on the back of the liquid crystal display, and the backlight plate is composed of a fluorescent substance. Light can be emitted, the main function of which is to provide a uniform background light source. The light emitted by the backlight enters the liquid crystal layer containing thousands of liquid crystal droplets after passing through the first polarizing filter layer.

LCD is a kind of splicing technology developed in recent years. Its biggest advantage is that it has low power consumption, light weight, long life, no radiation, uniform brightness, etc., but the biggest disadvantage of LCD is that the seam is larger. . The patchwork with a DLP of only a few tenths of a millimeter is unmatchable. This is also the key factor that LCD splicing only occupies the low-end market. In order to reduce the seams and reduce the gap between the seams and the users, LCD splicing manufacturers have been working hard for the past few years, the liquid crystal splicing unit seams, from the initial 7.3mm, to 6.7mm, to In 2011, the newly launched 5.5mm LCD splicing screen unit has continuously made breakthroughs in patchwork, which has set off the LCD splicing tide again and again.

PDP is the abbreviation of Plasma Display Panel, Chinese name is plasma display panel. PDP is a display technology that uses gas discharge. It uses a plasma tube as a light-emitting element. Each plasma tube on the screen corresponds to one pixel. The screen uses glass as a substrate. The substrate is separated by a certain distance and surrounded by a hermetic seal to form a A discharge space. The discharge space is filled with a mixed inert gas such as helium or neon as a working medium. A metal oxide conductive film is coated on the inner side surfaces of the two glass substrates as an excitation electrode. When a voltage is applied to the electrodes, a plasma discharge phenomenon occurs in the mixed gas in the discharge space. The gas plasma discharge generates ultraviolet light, the ultraviolet light excites the fluorescent screen, and the fluorescent screen emits visible light to display an image. When a phosphor screen coated with phosphors of three primary colors is used, the ultraviolet light excites the phosphor screen, and the light emitted by the phosphor screen is red, green, and blue. When each primary color unit realizes 256-level gray scale and then performs color mixing, color display is realized.

Compared with LCD technology, PDP splicing not only does, but the larger the screen, the higher the depth of field and fidelity of the image, and it also avoids the response time encountered in LCD technology, and the patchwork of PDP is now Up to 3mm, it is much smaller than the LCD splicing. Although it can't reach the stitching of a few millimeters of DLP stitching, it has little effect on the visual effect, and the screen of the PDP is very thin. Simply put, PDP splicing combines all the advantages of both LCD and DLP technologies while overcoming their shortcomings. Especially in recent years, plasma technology has overcome its own fatal shortcomings. After the phenomenon of â€œburning the screenâ€, more and more manufacturers have begun to enter the plasma market.

LCD splicing compared to other screens in the large screen market LCD splicing screen products are available in a variety of sizes including 40", 42", 46", 47" 55", 60" and other sizes of DID LCD splicing narrow side series, ultra narrow Side series, etc., can fully meet the needs of customers, can be arbitrarily combined according to the needs of the project, unlimited stitching to meet the needs of different places. With the development of splicing technology, the bottleneck of its seams has gradually made substantial breakthroughs. For example, the extremely 3.5mm patchwork LCD splicing screen launched by Ou Di this year fully guarantees the integrity of the display, with large-size DLP rear projection and The large screen display advantages of the PDP plasma splicing unit also make up for a series of unavoidable problems such as transportation and installation.

Among them, LCD splicing screen uses LCD backlight life is ten times that of rear-projection bulb, and the most significant advantage of projection is that BSR liquid crystal splicing technology is more mature and power saving is obvious; compared with DLP and PDP, except for LCD splicing High definition, high brightness, high color saturation, high contrast, high resolution, while the life of the liquid crystal is very long, and the power is low, the heat generation is small, the failure rate is very low, and the performance is stable. 7&TImes;24 Uninterrupted hours of work, low maintenance costs in the later period.